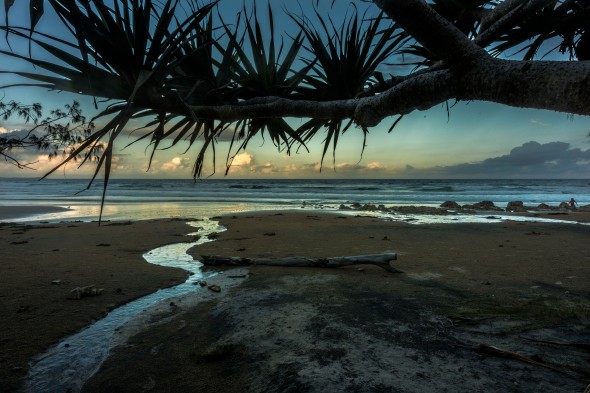 Burnt-out, cranky and desperate for solace to rediscover what it is to be a family, we packed the hatchback to the ceiling with just enough breathing room for Son & Heir and aimed for the coast.

We were so eager to leave behind the constant bbbbrrring of the phone, ping of the tablet and cha-ching of the hard-earned cash leaving the house that we set off in the dark at 3.30am.

Our pre-dawn escape turned out to be a fantastic inadvertent decision: with gloriously traffic-free freeways, we had covered a chunk of distance by sunrise.

When we pulled into Port Macquarie on the mid-North Coast of NSW for breakfast. a few bleary-eyed tradies and annoyingly beautiful bodies smugly jogging along the waterfront were the only human encounters while we chowed into our bi-annual takeaway food brekky. 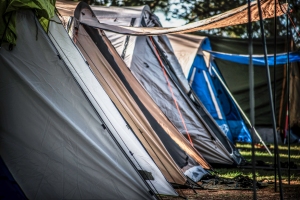 Just as we were beginning to flag, the hatchback was bouncing along a worn dirt track like an overburdened black beetle into Illaroo Beach on the far north coast of NSW between Coffs Harbour and Grafton.

We drove through the gates, reveling in familiar sights, feeling the oppression of worldly cares lifting from our hearts – until our gaze lifted, the rose tints slipped away and we were rudely confronted with reality.

Rows of overlapping tent lines, 4WDs littering the trackside, naked children trudging towards the beach and their undies flapping from makeshift clothes lines lay before us and the whiff of 50 barbecues sizzling in the summer sun hung in the salt-laden air. 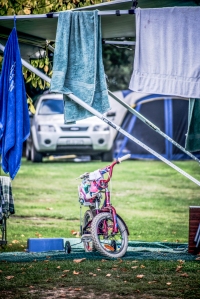 After 10 hours on the road it was too late to turn back. At that stage we would be hard pressed to find an alternative campsite either.

We ended up pitching camp in a perfect spot on a little rise at the back of the campground next to the bush with plenty of room for a large tent and a fire. By the time the hammock and clothes line were strung in front it had become our private den, where we stayed for two weeks of blissful unwashed solitude.

Our contentment to live alongside the masses in dishevelled harmony got us thinking: Why do millions of Aussies abandon their comfortable air-conditioned suburban palaces in search of a seaside Nirvana they know in reality is a tortuous day-long journey in the stinking heat with a 4WD crammed with squabbling offspring, blow-up beach toys and bikes precariously tied with odd bits of rope to the back obscuring the rear view?

Save on accommodation so you can splurge on treats. Photo: David Hill, Deep Hill Media

Renting a small patch of ground under the stars for $350 a fortnight means you can afford to take a cruise up the mighty Clarence River on the M.V. Mirigini from the boat ramp at Iluka because you haven’t had to shell out $350 a night for a hotel room.

It means you can buy the kids an ice cream after a day at the beach because you’ve bought healthy food from the supermarket and cooked it yourself on the barbie rather than splurged on takeaway food or expensive restaurant fare.

While the face of the Aussie beachside camping trip has changed, the spirit certainly hasn’t:. Thousands of Aussies join the mass migration up the east coast of the continent in search of surf, sand and sun, a simpler life, a breath of fresh air and re-connection with human beings they are supposed to share a life with.

From the swimming sessions, meal times, ducking into town and strolls at dusk, the campsite moves as one.

When one kid hears “Ja-ack! Tea’s ready! Tell Chloe to tell `Arry to tell Teagan tea’s ready!”, every kid knows it refers to them and, with a grumble and towels dragging on the ground, they trudge barefoot through squeaky sand still baking hot from the 40 degree sun and head for the family trough.

There is space for all in the great outdoors. Photo: David Hill, Deep Hill Media

With vast skies above and heaving water gobbling up the heavenly bodies in front, there is space enough for all at a beachfront campsite.

Even when the cowboys of the sand in their new 4WDs tear down the beach just out of reach of the waves, even when generations of campers have bagged the ultimate spot since 1952 and even when the grey nomads park a lumping great SUV with its whopping great aerial and pull-out veranda in the middle of the ground, there is space for all. 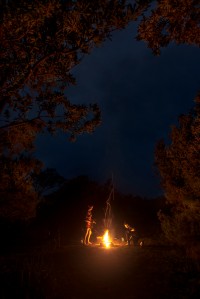 Like a flock of cantankerous cockatoos in a tree, the family groups squawk and squabble over the food. They hustle and huddle at the showers and grizzle and groan over chores. But they do it together.

When myriad electronic brain drainers and conversation killers every family is infected with eventually expire, there is no alternative but to talk to each other, play games, physically exercise, explore the surrounds and, wait for it …do absolutely nothing but sit around the campfire.

Everyone is equal in a swimming costume. Photo: David Hill, Deep Hill Media

Camping is a fantastic leveller. Yeah, the neighbours might have a new Range Rover to your ancient hatchback, they might have a you-beaut camp dunny and a portable oven but you all look the same in the water. Everyone smells putrid after a few days. Everybody blisters like an overcooked fried egg white in the sun. 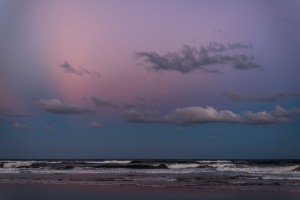 It’s cliche for sure, but nothing beats a dreamy sunset walk along the beach with your love while the kids you made together skip and squeal in the shallows in the distance.

Nothing matters when kids slave away all day in the blistering sun on a sandcastle and moat or digging a hole to the centre of the earth, only for the sea to wash away their progress in one spiteful wave on the next inbound tide. The ritual is repeated on the morrow over and over again and committed to the memory bank to be savoured when the complications of adulthood cloud a difficult day.

Stone the crows! It’s the Aussie way `init? You’re just not `Strayan if you haven’t taken the family camping, had a line of undies and cozzies strung between the guy ropes and eaten a sandy sanga in the salty haze of surf.

So grab a beer, douse yourself in mozzie spray and join Gazza, Bazza and Dazza at the barbie while Shaz, Maz and Kaz giggle and natter over glasses of bubbly and barefoot kids beg the dog to give up the cricket ball in the last rays of a tourism brochure kind of day and embrace the great outdoors.

You CAN escape the rat race with the rate race. Photo: David Hill, Deep Hill Media

– However, be prepared for traffic and factor travel times accordingly, scheduling meal and rest breaks to coincide with major bottlenecks such as Macksville on the north coast of NSW to avoid frustration and stress

– Pare back the luggage, especially clothes

– Embrace the crowds as an opportunity to meet new friends

– Focus on picturesque, quirky and unique sights rather than hysterical billboards counting down the kilometres to the next fast food restaurant

Soak up the solitude with everyone else. Photo: David Hill, Deep Hill Media

* Deep Hill Media stayed at Illaroo Campground in Yuraygir National Park at their own expense.